A few years ago,

_niece produced a startlingly memorable definition of reverse cargo cults. I translate it herewith as invaluable commentary on a dominant Russian mindset.

The discussion of political cynicism by

bars_of_cage makes an interesting point about the Eskimos and their lack of immunity to that, which the general public regards as unimpeachable realism, and all pleasantly brazen (by the way, who or what is made out of brass here? what is the meaning of this vague term?) cynicism. Russia is a country nearly converging on modernity in its development and largely imitative in its culture (which does not detract from, etc. — but what’s the point of producing disclaimers for dimwits?). Its forms of social organization and public administration are almost entirely borrowed and implanted with more or less violence, in the course of repetitive, as Lyubarskii demonstrates (my God, what a book! The author must be urgently appointed the Minister of Everything), waves of westernization. That is why many of these forms exhibit the purely decorative character of window dressing, “показуха”, as it is called in Russian. Because, in turn, there is a feeling that the state of affairs is the same everywhere—up front it’s parliamentarism and napkins, but setting aside the pretense meant to beguile the visitors, it comes to a busting of chops, and, in the terms of

It’s something like a reverse cargo cult—the faith that white people also construct their planes of straw and manure, but they are just better than we are at pretending. And we, the pure of soul aboriginals, pretend not as convincingly, and this is also a point of secret pride. This faith is particularly prevalent among the leadership—they too take pride in being cynical and not believing in airplanes and “тушёнка”, canned meat—for there is no such thing as canned meat, it’s the same ground human flesh as we prepare in the Tomsk drunk tank. 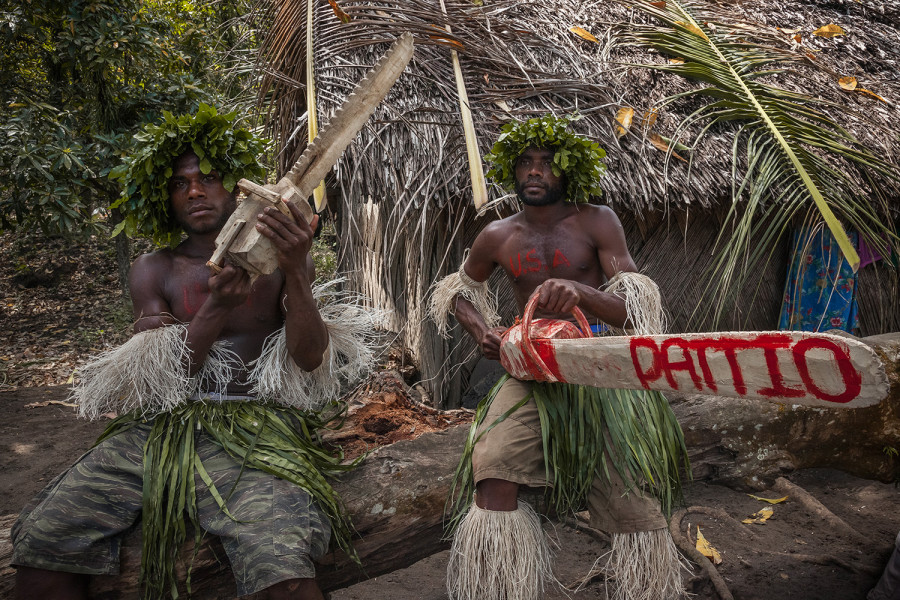 D.F. Aberle has elaborated the explanation of cults generally in terms of relative deprivation. But in Melanesian cultures the question was “Are you a man or are you rubbish?” The cargo cultists doubted the possibility of gradually improving their lot; they perceived the gap between themselves and the Europeans as absolute, not as relative. They believed that God and the spirits of the dead, not living men, produced such goods as pressure lamps and automobiles and that Europeans deliberately excluded them from receiving their designated share of the wealth. Only supernatural intervention—instant parity—could solve the problem. They pinned no hope on independence. In fact, many natives feared that independence would mean a return to the strife and insecurity of their pre-European way of life—a kind of reverse cargo cult, a movie running backwards, with the European ships being reloaded and disappearing over the horizon.
Other anthropologists maintain that cult beliefs are rational constructions based on native premises and limited experience of European culture. Some, in the earlier literature, regarded the cult as a kind of temporary madness—a confusion that comes when native ideas mix with new experiences and produce misinterpretations. Similarly, Anthony Wallace saw religious cults as manifestations of psychological stress: the pressures of adjusting to a new culture increase until they trigger a neuro- endocrinological event that in some way causes a cognitive resynthesis in a key individual. This would be the prophet or cult leader who offers a new, more satisfying worldview to his followers. Coma, hallucination and convulsion supposedly indicate the stress-resynthesis crisis.
—Theodore Schwartz, “The Noise: Cargo Cult Frenzy in the South Seas”, Psychology Today, March, 1971, pp. 51-54, 102-103 + illustrations
I call this kind of situation “value dominance”—being overcome by others in terms of one’s own values. Under value dominance there is no chance of telling oneself that the wealth of the other is of no importance compared to one’s own spirituality or other values. The two cultures, broadly speaking, met on the common ground of materialistic, competitive striving for prestige through entrepreneurial achievement of wealth. Parity had to be not so much achieved as acquired. The supernatural was not so much a source of spirituality as it was a partner in enterprise. The missionary, whatever he himself believed, was taken as offering access to a supernatural partnership more appropriate to the new forms and scale of wealth and power. Thus culture contact with Europeans produced a situation of value dominance rather than of value complementarity or contrast.
—Theodore Schwartz, “The Cargo Cult: A Melanesian Type-Response to Change”, in DeVos, George A., Responses to Change: Society, Culture, and Personality, New York: Van Nostrand. 1976 p. 174
Tags: anthropology, politics, religion, russia, russian, russians, stupidity, translation
Subscribe