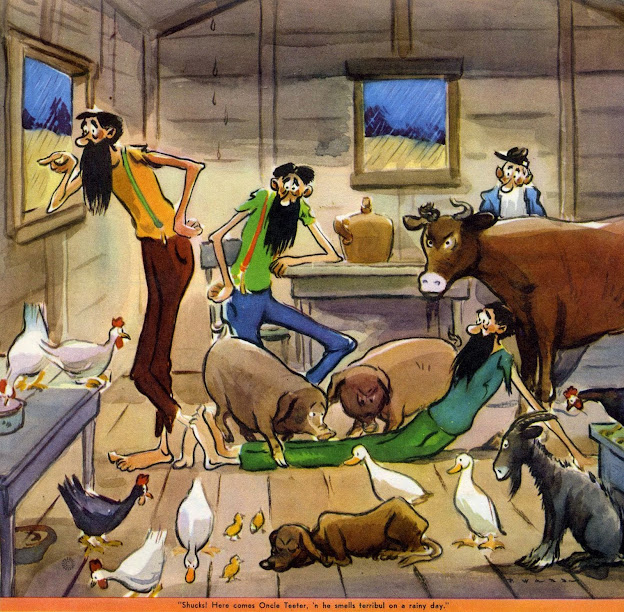 So the man gets comfortable and sips his cocktail. And by and by he becomes peckish, and asks the bartender for a bite to eat. All the bartender can offer him is pork rinds, so that’ll have to do. So the man chomps down on those salty, crunchy pork rinds. And he likes them. In fact, he likes them so much that he gets a pork rind lodged in his throat. After a minute or so he is in real distress. So one of the barflies walks up to him and says, “Kin ya swallar?” The man shakes his head. And the hillbilly follows up, “Kin ya breathe?” The man shakes his head as he begins to turn blue. And the hillbilly reaches around the man’s waist, unbuckles his belt, drops his breeches, yanks down his briefs, and sticks his tongue up his ass crack. The man is so shocked that he has a violent spasm, which causes the pork rind to fly out of his mouth. As he begins to breathe again, he struggles to express his gratitude to the good Samaritan. And the hillbilly goes, “Hit don’t mean doodley squat. Ackshly, I’m much obliged to ye. Ya know, I’d heerd of that there ‘Hind Lick Maneuver’ but I ain’t niver had no chance to do it to anyone before!”