the revolvers of willi korth

Willi Korth was born in Stargard / Pommern on 11 July 1913. He learned machining and toolmaking at the Deutsche Reichsbahn between 1930 and 1934. Ten years later, in the summer of 1944, he briefly worked at Mauser-Werke under contract as an independent designer of military small arms. In August of 1950 Korth moved to Ratzeburg. Next year he found a job as a manager at the Hubertus Metallwerke in Mölln. In 1952 Korth resigned to pursue his own designs. His first effort was a blank firing gas revolver. The few gas revolvers, designed and manufactured by Korth in the winter of 1954/55, are now sought after as collector’s items.
On 1 October 1955, following the expiration of the postwar ban on German manufacture of firearms, Korth founded a company in Ratzeburg under the name of Willi Korth, Waffenfabrikation. In September of 1955 Korth exercised his first manufacturing license for firearms. In 1962 he designed and manufactured his first revolver, initially chambered in .32 S&W Long, the highest caliber allowed by the terms of his license. Instead of a traditional cylinder release on the left hand side of the frame, the cylinders of these revolvers were unlatched from the frame by pulling forward the head of the ejector rod. The crane lock was released by the leftward push of a button located on the right hand side of the frame under the cylinder, whereupon the entire crane assembly complete with the cylinder would slide forward for removal from the frame. 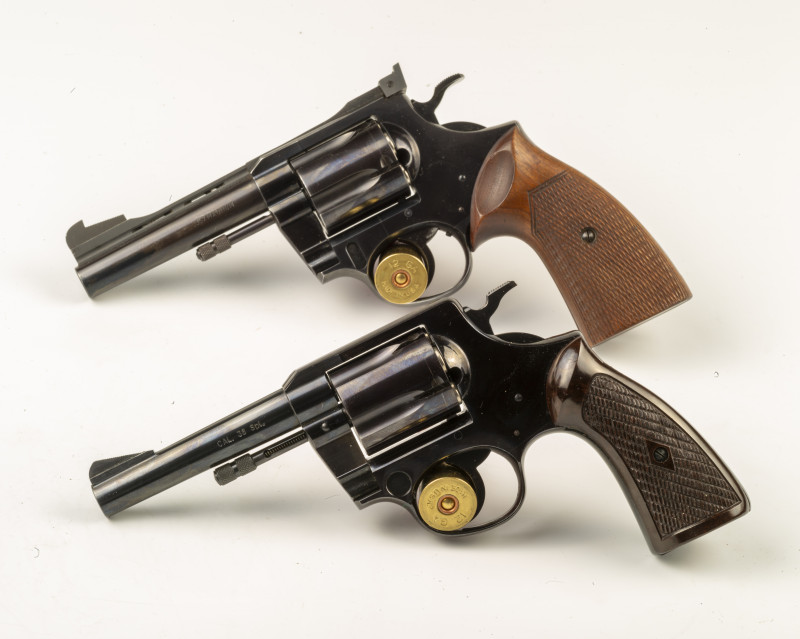 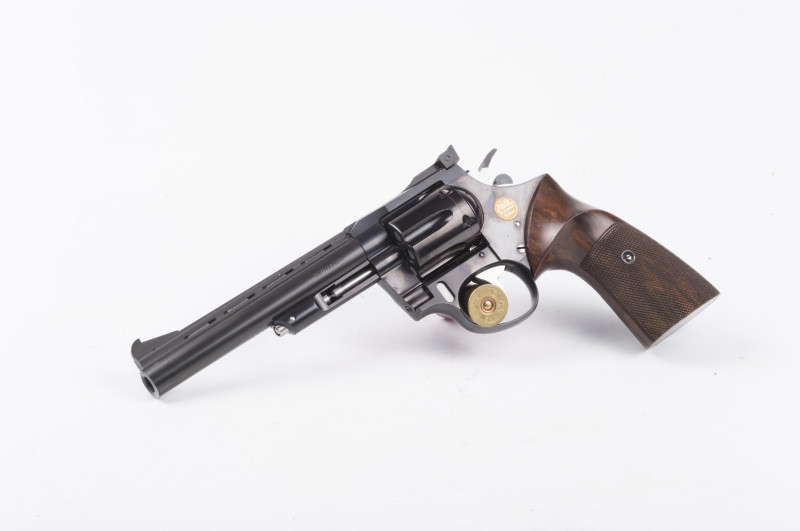 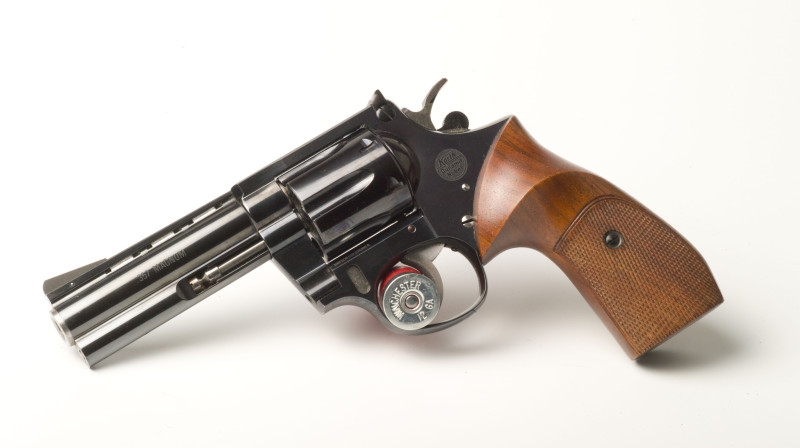 Made on 12 December 1977, 4" Korth Combat revolver, serial number 31157
Meanwhile, beginning in 1978, Willi Korth had refocused his design work on a new autopistol, considering the action of his revolvers fully perfected. Notwithstanding the first five prototypes produced in 1982 with features patented in Germany as DE 3111037 A1 and DE 3203991 A1, the manufacture of the first series did not start until 1989. The pistol never succeeded commercially, owing both to lack of development and the initial retail price of $6,750.00. 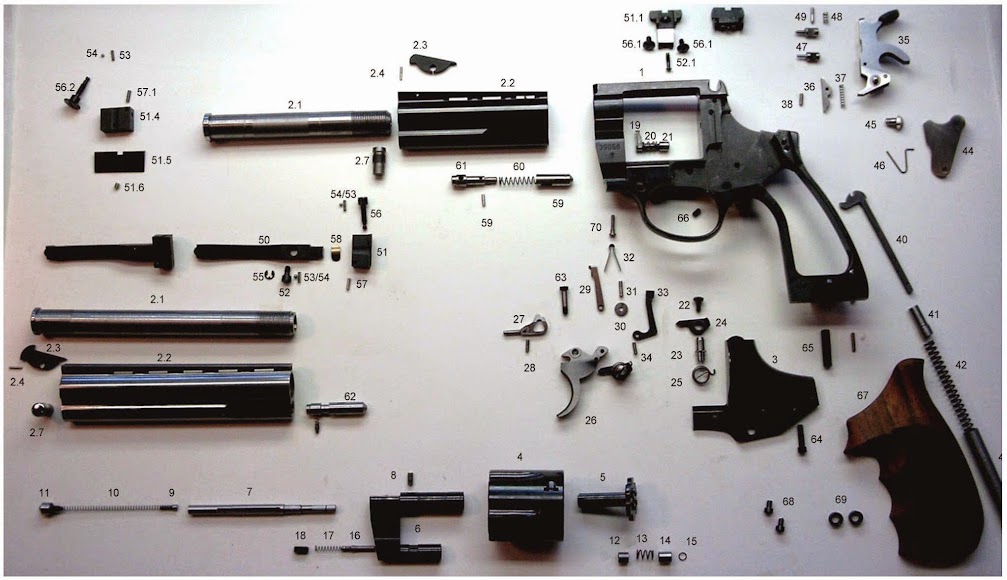 Korth revolver parts:
Willi Korth’s revolvers were benchmade by five gunsmiths at the rate averaging about 120 pieces a year. Except for their wooden grips and their screws (parts 67, 68, and 69), and two hex socket action screws (parts 18 and 66), outsourced to specialty outside suppliers, every part was made in house. In contrast to the mass production standards, Korth revolver parts were neither cast nor milled. They were ground in the course of hard fitting from steel forgings that boasted a tensile strength of 1,700 psi. Each revolver required 70 man-hours that comprised 600 distinct operations. Their major components were surface hardened up to 60 HRC on the Rockwell hardness scale. The original production of Korth revolvers ended in 1981 with the serial number series 33xxx, adding up to a total of 7141 revolvers in calibers .38 Special, .357 Magnum, 9mm Para, .22LR, and .22 Magnum, with barrel lengths ranging from 3" to 6", fitted with 6-shot rimfire and both 5- and 6-shot centerfire cylinders. The three main variants were the Combat, the Sport, and the Target models, some of which were finished as engraved luxury pieces. 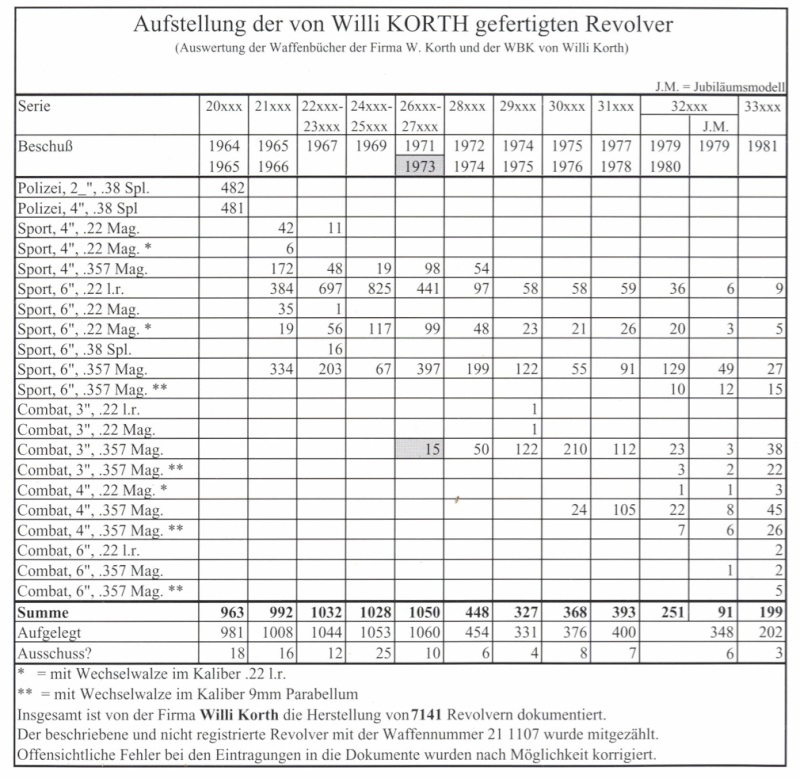