With due respect to Buffalo Springfield, there’s a man with a gun over there, and what he wants ain’t exactly clear.
“There” is a corner of Sand Hill Road at the entrance to the Rosewood Sand Hill hotel near Interstate 280 in Menlo Park. The man with the gun said he is Los Angeles resident Michael Zeleny, who showed up there on Thursday (Feb. 9).
He’s wearing a surplus military uniform complete with combat helmet and bullet-proof vest. He’s carrying a semi-automatic M14 military rifle that he says is unloaded, and a long-lens camera.
Police arrived, questioned the man, but made no arrest. [And so on, with photos and comments.]
By Dave Boyce
Almanac Staff Writer 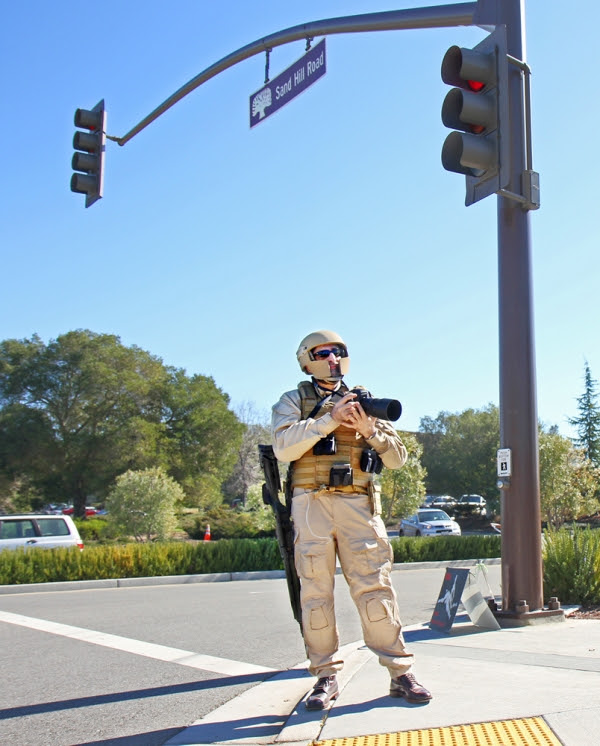 UPDATE: To clarify, here is my comment, partially redacted by the Almanac because “[their] forum is not the place to make allegations of criminal wrongdoing”:

Thanks to Dave Boyce for this fair and balanced report.

In regard of my demands, the hotel complex at which I am holding my protest also houses New Enterprise Associates (NEA), self-described in their court filings in connection with this matter as our world’s wealthiest and most important venture capital firm, with over $11 billion under management. It is also the firm that funded its protégé Min Zhu, the founder of WebEx Communications, right after my outing of him as a rapist of his 14-year old daughter at the 2005 WebEx user conference in San Francisco caused Min to resign from his job and flee the United States. The public deserves to learn the lesson Min had taught me, that a violent incestuous paedophile will treat his business partners like family.

I might have overlooked this matter even after receiving independently witnessed death threats against me and my family, made in the names and on the behalves of Min Zhu and WebEx, in the course of our $70 million business dispute. I went public with my story only after my father Isaak, plaintiff in a related lawsuit, died from injuries sustained in an apartment fire of suspicious causes and origins. As the poet said, there is some shit I will not eat. An apology from all responsible parties is in order.

You can find my story along with links to supporting documentation at subrah.com.