If you say you'll stay home if Clinton's the nominee, you're probably protected from the consequences of a Trump presidency.

Clinton lucky social media wasn't around in her early career

Hillary Clinton should be thankful that her career as America's truth bender began long before social media really got going. 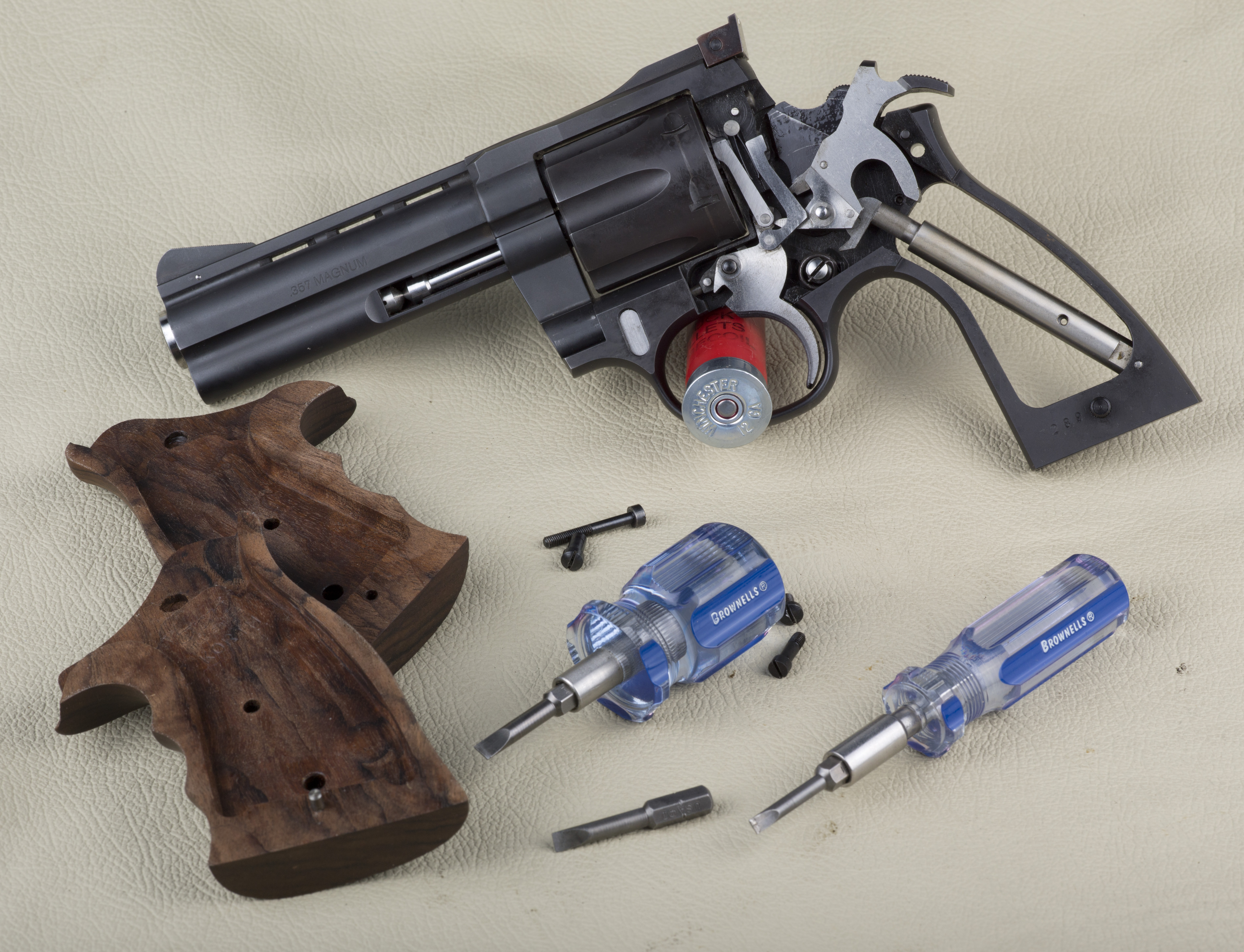 Korth revolver actions are essentially S&W turned inside out. The cylinder rotates righteously clockwise, Colt-like. The ejector rod locks on by sliding its cylindrical head into a cylindrical penal, rather than by being latched on its concave head. The mainspring operates via a piston sliding inside another cylinder, Schmeisser SMG-like. The crane, its English nomenclature and function another nod to Colt, likewise limits the forward cylinder travel by its collar supporting the neck of the cylinder. Korth’s barrel has been tensioned against its shroud since long before S&W took that cue from Dan Wesson. On the other hand, Colt’s double action revolvers are defined by the “bank vault lockup” of lockwork that uses an impinging double-headed hand pushing the cylinder against the locking bolt to lock it solidly in place at the moment of pulling the trigger all the way back. The harder the trigger is pulled, the tighter the cylinder is locked. Consequently, as the cylinder recoils, it compresses the hand, eventually peening it out of spec. This is all the more applicable to Magnum chamberings never contemplated by the original European inventors. The ensuing requirement for periodic maintenance is the price you have to pay for shooting a Python.

Colt’s V-spring revolvers employ a licensed Franco-Swiss Schmidt-Galand design that uses its distinctive double-headed hand as a kind of sacrificial element. The hand is stressed past its yield point at the moment of firing and bears the brunt of recoil, because as the combustion gases cause the cartridge case to expand, it briefly locks to the walls of the cylinder chamber and transfers most of the recoil momentum to the cylinder, which in its turn bears upon the hand by way of its interface with the extractor star, which at that moment is tensioned by the trigger being squeezed by the shooter’s finger. (I hope you are still with me.) This method of construction is intrinsically more dependent upon hand-fitting, owing to the need for ensuring a nil clearance at lockup. It is also more maintenance-intensive, owing to the recoil forces thrusting against the impinging surfaces with each instance of firing. Korth’s action, by contrast, operates on the S&W principle that eschews stressing the single-headed hand at the moment of firing. Accordingly, while its construction is at least as labor-intensive as that of a Colt revolver, its maintenance requirements are even less than those of an S&W, owing in equal measure to far superior fitting and finish of parts of stronger steel alloy with better heat treatment. Willi Korth boasted that his revolvers retained their accuracy after firing 55,000 full power Magnum rounds. I retain a large fraction of several dozen of Korth revolvers I imported from Germany and Switzerland over the past decade. I have studied and fired them enough to be persuaded by Willi.

As to the ergonomics of action design and construction, since the 24xxx series, introduced by Willi Korth in 1969, his revolvers featured an innovation in the trigger action, patented in Germany as DE 1904675 A1, and designed for a precise and tunable stacking transition in double action, achieved through the use of variously sized rollers on the trigger impinging upon the double action sear on the hammer, as seen in the above photos. Thenceforth every revolver was shipped with five numbered metal wheels of different diameters that ranged from No.1 (0.283") for the hardest stacking transition to No.5 (0.293"), for no stacking at all. While No.1 to No.3 feel like a well-tuned Colt V-spring action with more or less stacking, the Ed McGivern style pistolero would be better served with the perfected S&W action of the Manurhin MR73.

I don’t believe that Colt’s bank vault lockup is likely to result in greater accuracy most of the time, given the results achieved by the looser S&W-style lockwork used by Korth and Manurhin alike, which allows the cylinder to rotate slightly when locked, with the chamber being momentarily aligned with the bore by the bullet entering the forcing cone. Still, it bears notice that Colt’s .22LR Officer’s Match revolver counts among the most accurate rimfire sixguns on record. It bears further notice that the standing world 25 meter centerfire record of 594/600, has been set on 17 July 2007 by Mikhail Nestruev shooting a 40 year old TOZ 49, a 7.62 Nagant Short variant of the TOZ 36, itself derived from the 1895 Nagant, a revolver that tensions its cylinder at the moment of firing far beyond the degree imposed by the Colt design. So it would be interesting to see more Colt V-spring revolvers in bullseye competition, but ever since American police armorers stopped supporting such endeavors, any aspiring Python pistolero had better find another source of state support of the grade given to Nestruev.

That about sums it up. Except for this: 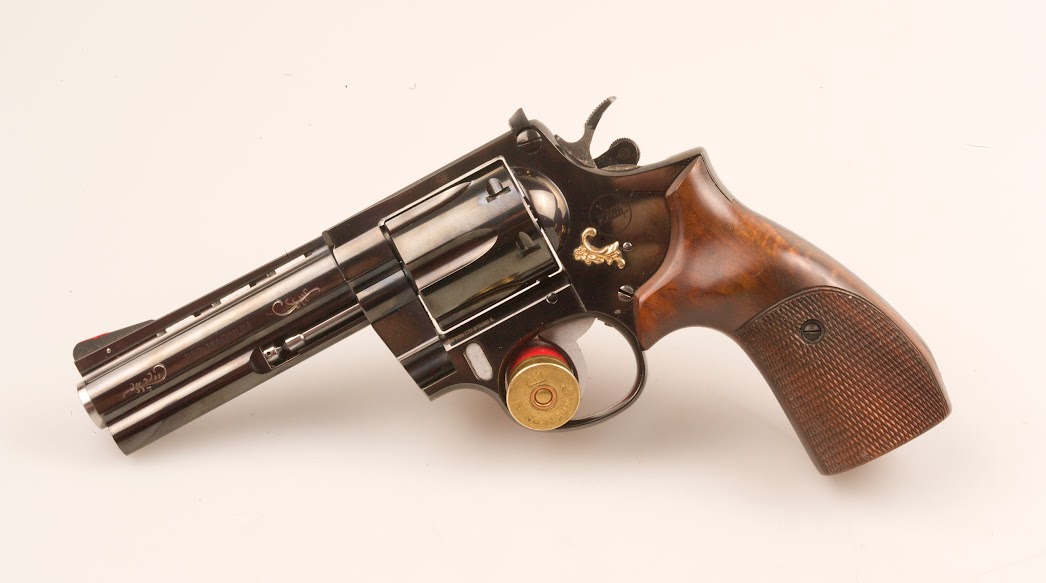 Pimp my gun. Not nearly as pretty as a Python, to be sure:

So choose your poison: Ava Gardner or a sturdy Bauernmädchen?