The most important and comprehensive duelling document for the English-speaking world was undoubtedly the Irish Code Duello “adopted at the Clonmel Summer Assizes, 1777, for the government of duellists, by the gentlemen of Tipperary, Galway, Mayo, Sligo and Roscommon, and prescribed for general adoption throughout Ireland.”

II. But if the parties would rather fight on, then, after two shots each (but in no case before), B may explain first and A apologize afterwards.
N.B. The above rules apply to all cases of offences in retort not of a stronger class than the example.

III. If a doubt exists who gave the first offence, the decision rests with the seconds. If they will not decide or cannot agree, the matter must proceed to two shots, or to a hit if the challenger requires it.

IV. When the lie direct is the first offence, the aggressor must either beg pardon in express terms, exchange two shots previous to apology, or three shots followed by explanation, or fire on till a severe hit be received by one party or the other.

V. As a blow is strictly prohibited under any circumstances among gentlemen, no verbal apology can be received for such an insult. The alternatives, therefore, are: The offender handing a cane to the injured party to be used on his back, at the same time begging pardon, firing until one or both are disabled; or exchanging three shots and then begging pardon without the proffer of the cane.
N.B. If swords are used, the parties engage until one is well blooded, disabled, or disarmed, or until, after receiving a wound and blood being drawn, the aggressor begs pardon.

VI. If A gives B the lie and B retorts by a blow (being the two greatest offences), no reconciliation can take place till after two discharges each or a severe hit, after which B may beg A’s pardon for the blow, and then A may explain simply for the lie, because a blow is never allowable, and the offence of the lie, therefore, merges in it. (See preceding rule.)
N.B. Challenges for undivulged causes may be conciliated on the ground after one shot. An explanation or the slightest hit should be sufficient in such cases, because no personal offence transpired.

VII. But no apology can be received in any case after the parties have actually taken their ground without exchange of shots.

VIII. In the above case no challenger is obliged to divulge his cause of challenge (if private) unless required by the challenged so to do before their meeting.

IX. All imputations of cheating at play, races, etc., to be considered equivalent to a blow, but may be reconciled after one shot, on admitting their falsehood and begging pardon publicly.

X. Any insult to a lady under a gentleman’s care or protection to be considered as by one degree a greater offence than if given to the gentleman personally, and to be regarded accordingly.

XI. Offences originating or accruing from the support of ladies’ reputations to be considered as less unjustifiable than any others of the same class, and as admitting of slighter apologies by the aggressor. This is to be determined by the circumstances of the case, but always favourably to the lady.

XII. No dumb firing or firing in the air is admissible in any case. The challenger ought not to have challenged without receiving offence, and the challenged ought, if he gave offence, to have made an apology before he came on the ground; therefore children’s play must be dishonourable on one side or the other, and is accordingly prohibited.

XIII. Seconds to be of equal rank in society with the principals they attend, inasmuch as a second may either choose or chance to become a principal and equality is indispensable.

XIV. Challenges are never to be delivered at night, unless the party to be challenged intends leaving the place of offence before morning; for it is desirable to avoid all hotheaded proceedings.

XV. The challenged has the right to choose his own weapons unless the challenger gives his honour he is no swordsman, after which, however, he cannot decline any second species of weapon proposed by the challenged.

XVII. The seconds load in presence of each other, unless they give their mutual honours that they have charged smooth and single, which shall be held sufficient.

XVIII. Firing may be regulated, first, by signal; secondly by word of command; or, thirdly at pleasure, as may be agreeable to the parties. In the latter case, the parties may fire at their reasonable leisure, but second presents and rests are strictly prohibited.

XIX. In all cases a misfire is equivalent to a shot, and a snap or a non-cock is to be considered a misfire.

XX. Seconds are bound to attempt a reconciliation before the meeting takes place or after sufficient firing or hits as specified.

XXI. Any wound sufficient to agitate the nerves and necessarily make the hand shake must end the business for that day.

XXII. If the cause of meeting be of such a nature that no apology or explanation can or will be received, the challenged takes his ground and calls on the challenger to proceed as he chooses. In such cases firing at pleasure is the usual practice, but may be varied by agreement.

XXIII. In slight cases the second hands his principal but one pistol, but in gross cases two, holding another case ready charged in reserve.

XXIV. When the second disagree and resolve to exchange shots themselves, it must be at the same time and at right angles with their principals. If with swords, side by side, with five paces’ interval.

XXV. No party can be allowed to bend his knee or cover his side with his left hand, but may present at any level from the hip to the eye.

XXVI. None can either advance or retreat if the ground is measured. If no ground be measured, either party may advance at his pleasure, even to the touch of muzzles, but neither can advance on his adversary after the fire, unless the adversary steps forward on him.
N.B. The seconds on both sides stand responsible for this last rule being strictly observed, bad cases having occurred from neglecting it.

N.B. All matters and doubts not herein mentioned will be explained and cleared up by application to the Committee, who meet alternately at Clonmel and Galway at the quarter sessions for that purpose. 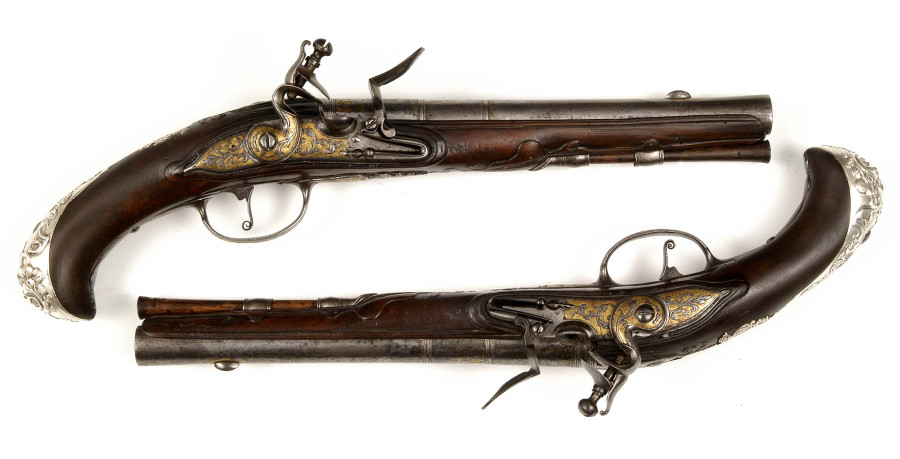 In response to my assertion of justice in putting an aggressor in his place, a Russian friend asks… Posted by Michael Zeleny on 5 Jun 2015, 02:17

Q: What’s the difference between Arab girls and American girls? A: American girls get stoned… Posted by Michael Zeleny on 5 Jun 2015, 06:33