I
Writing a year after the end of WWI, prewar Olympic gold and silver pistol shooting medalist Walter Winans began Chapter I of his treatise The Modern Pistol and How to Shoot It with a bold pronouncement: “There is now no use learning revolver shooting. That form of pistol is obsolete except in the few instances where it survives for target shooting, or is carried for defense; just as flintlock muskets even now survive in out-of-the-way parts of the world. If a man tries to defend himself with a revolver against another armed with the automatic pistol he is at a great disadvantage. […] The automatic is more accurate than a revolver [and has] a much longer range than the revolver.” This article is concerned with technical features of the most conspicuous exception to Winans’ pronouncement, the Manurhin MR73, the last revolver developed and fielded forty years ago as an offensive sidearm, a capacity in which it continues to excel to this very day.
But first, a few words about its precursors. ( Collapse )

III
We come to consider a toolmaker founded in 1919 in Mulhouse under the name Manufacture de machines du Haut-Rhin, abbreviated as Manurhin. In the wake of World War II, Manurhin started making small arms, beginning with licensed copies of Walther pistols. Initially, the Walther plant was located in Zella-Mehlis in Thuringia, Germany. As a result of Russian occupation of East Germany, Walther relocated to Ulm in Baden-Württemberg. While firearm manufacture was forbidden by the Allied powers, starting in 1952 Walther licensed the production of its rimfire Olympia target pistols to Hämmerli in Switzerland, that of its Model 2 bolt action and semiautomatic carbine to Beretta in Italy, and that of its PP, PPK, and P38 series pistols to Manurhin in France. In 1955 the ban on firearm manufacture expired and handgun production resumed at the Walther plant in Ulm, though early models utilised many parts manufactured by Manurhin. Manurhin produced the Walther designs from 1952 until 1986, when full manufacture and production of the PP and the PPK resumed in Ulm, to continue until 1999. Between 1978 and 1988, Manurhin also manufactured under license by the Swiss company Schweizerische Industrie Gesellschaft the assault rifles SIG 540/542/543. After 1989, the corporate mission of Manurhin gradually shifted away from small arms manufacture to focus on the design and manufacture of machinery for production of military munitions in small and medium calibers. Its swan song, the MR93 revolver, invented by Alain Lechelle and protected by U.S. Patent number 4897950 and U.S. Patent number D316442, and known to the general public mainly through a guest appearance in a Dan Brown potboiler, along with its restyled and updated descendant, the MR96, were distinguished by automated manufacturing techniques that assembled them within four hours of the arrival of an order, out of part stock machined to extremely tight tolerances maintained within 1⁄100 of a millimeter, and with minimal manual adjustment. Regrettably, these remarkable sixguns failed commercially as a result of constabulary sidearm fashions worldwide shifting to autopistols. This failure caused Manurhin to withdraw entirely from small arms manufacture in 1998. Their designs and tooling were acquired by artisanal gunmaker, Manufacture d’armes de tir Chapuis, located in Saint-Bonnet-le-Château of the Loire department of France, where it continues to this day, albeit currently limited to the subject of this study, the legendary MR73.
In the early Seventies, the French constabulary faced an extraordinary criminal threat. The country remained awash in weapons left over from its occupation in WWII. Le milieu, the thoroughly updated twentieth century successor of the swell criminal mob (la haute pègre) originally mythologized by Balzac in La Comedie humaine, did not hesitate to employ military grade firearms in bank robberies. The gang of the Lyonnais employed an enviable array of handguns, submachine guns, and assault rifles to great effect in over 35 daring robberies that netted up to twelve million francs apiece between 1967 and 1977. As a result, French police agencies gradually accepted the idea of ​​arming their personnel, traditionally equipped with blowback autopistols chambered in .32 ACP, with locked breech autopistols and heavy duty revolvers chambered in 9mm Para and .357 Magnum. American-style handgun shooting reached Europe in the 1962, with Raymond Sasia, a judo instructor employed as a bodyguard by Charles de Gaulle, who was sent to study the shooting techniques of the FBI Academy in Quantico, Virginia. He returned to France with an FBI certification and founded CNT, the National Center for Shooting Instruction of the National Police (le Centre National de Perfectionnement du Tir de la Police Nationale), a shooting school in Paris that taught range officers, French nationals at first, then foreigners. The latter, upon returning home, taught new range officers. Thus the method “Sasia” promulgated FBI’s revolver shooting techniques throughout the Western world. Meanwhile, CNT sought to develop and adopt a standard issue police sidearm. Sasia’s experience of training with the FBI dictated chambering the revolver in .357 Magnum. At first, Smith and Wesson developed at his behest and on his behalf, a special production run of its .357 Magnum Model 19 revolver, designated M19-3RS, equipped with a 3" barrel and fitted with fixed sights. 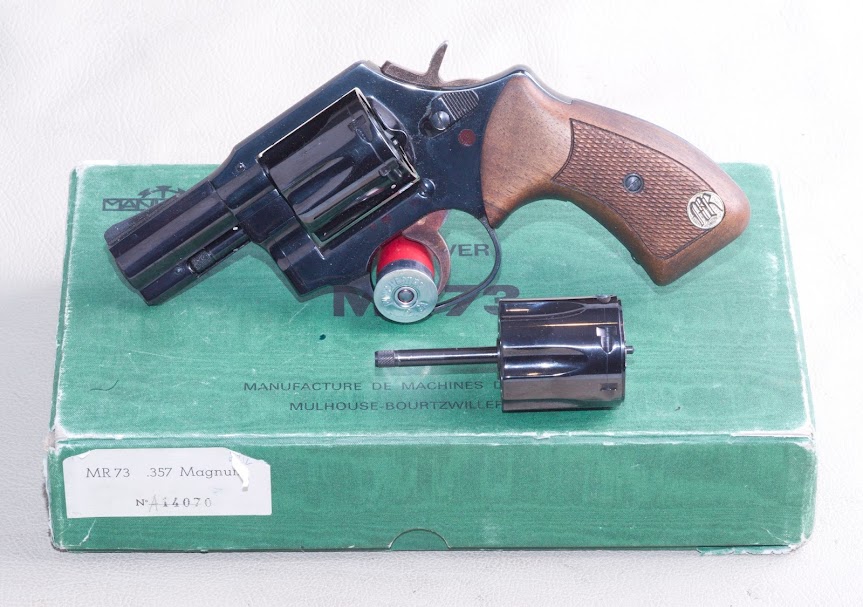 2½" Manurhin MR73 Police/Defense, serial number A14070, in .357 Magnum and 9mm Para
In 1971, the Service d’études techniques de la Police Nationale of the Interior Ministry, headed by master shooter Valéry Carmona, charged Manurhin with the creation of a new French .357 Magnum dual purpose (police-sporting) revolver. The stage was set on issuing a French product, expected to number 80,000 revolvers, in constabulary service. The Manurhin MR73 revolvers ensued from this program. Its titular year saw the production of Police/Defense fixed sight variants with 2½", 3", and 4" inch barrels, in 9mm Para and .357 Magnum. The following year Manurhin rolled out its Match and Sport versions, with 4", 5¼", 6", and 8" barrels, all in the .357 Magnum caliber. In 1977, it added 3", 5¼", and 8" GIGN (Gendarmerie) versions in .357 Magnum. In 1980 and 1981 came the turn of the MR32 and MR38 Match revolvers in .32 S&W Long and .38 S&W Special, along with the 9" MR73 Long Range. The centerfire MR range was completed in 1983 with the 10¾" MR73 Silhouette in .357 Magnum and the limited production, stainless steel MR73 10-year commemorative. The MR22 in .22LR and the small-frame 5-shot Remora in .38 S&W Special followed in 1986.The MR range culminated in 1987 with the Convertible model, fitted with interchangeable, tensioned barrels fed by hand-detachable cylinders in .38 Special, .32 S&W Long, and .22LR, with the aid of a frame-mounted firing pin selectable for centerfire or rimfire ignition.

5¼" Manurhin MR73 Sport, serial number A14070, in .357 Magnum, fitted with smooth wraparound Nill stocks
Upon its introduction, the French Gendarmerie switched from the Petter-type semiautomatic 9x19mm PA MAC 1950 to these revolvers for its special counter-terrorist unit, Groupe d’Intervention de la Gendarmerie Nationale (GIGN). To this day, these French SWAT units, otherwise armed with a broad spectrum of German, American, and Israeli-made weapons, use the 4", 5¼", and bipod-mounted 8" barreled Manurhin MR73 revolvers for snap shooting and deliberately aimed fire at ranges from point blank to 200 meters. V
Let us examine the details of the MR73 design and construction via its parts diagram: Edward Clinton Ezell, Handguns of the World: military revolvers and self-loaders from 1870 to 1945, Stackpole Books, 1981 — The author thanks the community of Tir Mailly Forum for their contributions of information incorporated in this article.

The teacher is discussing Christmas Eve with her students. “Tell us, Patrick O’Malley, what do you… Posted by Michael Zeleny on 20 Dec 2014, 00:49