the ethics of discrimination, part I 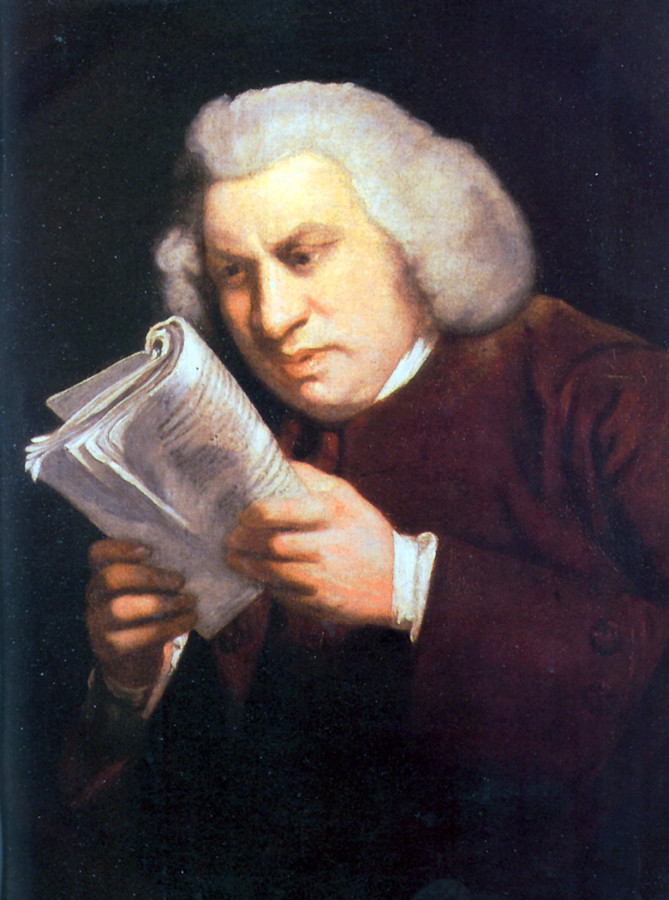 A portrait of Samuel Johnson by Joshua Reynolds, 1775
Samuel Johnson, the scholar who sought to refute Bishop Berkeley’s doctine of the non-existence of matter by striking his foot with mighty force against a large stone, is a strong candidate for the least philosophical mind in his nation of shopkeepers. Thus on 26 February 1751, in Rambler 99, Dr Johnson inveighed against the human counterpart of impartiality:

Other animals are so formed, that they seem to contribute very little to the happiness of each other, and know neither joy, nor grief, nor love, nor hatred, but as they are urged by some desire immediately subservient either to the support of their own lives, or to the continuation of their race; they therefore seldom appear to regard any of the minuter discriminations which distinguish creatures of the fame kind from one another.
But if man were to feel no incentives to kindness, more than his general tendency to congenial nature, Babylon or London, with all their multitudes, would have to him the desolation of a wilderness; his affections, not compressed into a narrower compass, would vanish like elemental fire, in boundless evaporation; he would languish in perpetual insensibility, and though he might, perhaps, in the first vigour of youth, amuse himself with the fresh enjoyments of life, yet, when curiosity should cease, and alacrity subside, he would abandon himself to the fluctuations of chance, without expecting help against any calamity, or feeling any wish for the happiness of others.

Five decades later, Dr Johnson’s compatriots continued to debate this issue in more abstract terms. An early theoretician of modern anarchism, William Godwin formulated a thought experiment in his 1793 Enquiry Concerning Political Justice and its Influence on Morals and Happiness, wherein an agent had to choose only one person to save from a burning building: one being archbishop Fénelon and the other his chambermaid. Godwin applied the utilitarian principle of seeking the greatest good for the greatest number, concluding that a rational agent would save the archbishop instead of his chambermaid, even if the chambermaid had been his wife, his mother, or his benefactor. (In anticipation of the principle calling for the rescue of women and children first, by 1798 Godwin amended his argument to contrast the rescue of the archbishop with that of a valet that might have been the rescuer’s brother, his father, or his benefactor.) In support of his repudiation of individual duty, Godwin asked: “What magic is there in the pronoun ‘my’ that should justify us in overturning the decisions of impartial truth?” 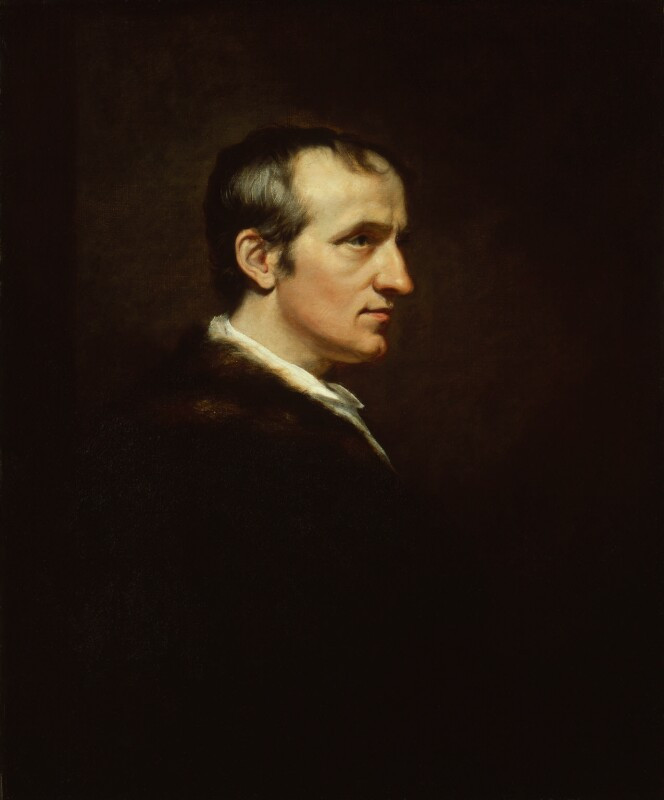 A portrait of William Godwin by James Northcote, 1802
In appealing to impartial truth, with its copulations of propositions, is, and is not to arbitrate between partial values, each of whose propositions were connected with an ought, or an ought not, Godwin ran roughshod over the distinction that had been posited six decades earlier by David Hume. But his contemporaries, who were equally disinclined to distinguish facts from values, were amused, if not incensed. Thus Charles Lamb: “If I can guess at the wicked pride of the Professor’s heart, I would take a shrewd wager that he disdains ever again to dip his pen in Prose. Adieu, ye splendid theories! Farewell, dreams of political justice! Lawsuits, where I was counsel for Archbishop Fenelon versus my own mother, in the famous fire cause!” Whereas the Whig counterpart to Dr Johnson, Samuel Parr, strove not to mock, but to refute Godwin in his 1801 Spital Sermon:

Probably, if the appeal were made to the common sense and common experience of mankind, the circumstance that they are mine would, even in the case supposed by our philosopher, be of great consequence. But what if a father were neither a fool nor a profligate, would it then be of consequence that he was mine? Would the remembrance of his relation to me be no cause of endearment, no incitement to acts of beneficence towards him? I believe that Aristotle would have laid much greater stress upon the pronoun “my”, δύο γάρ ἐστιν ἃ μάλιστα ποιεῖ κήδεσθαι τοὺς ἀνθρώπους καὶ φιλεῖν, τό τε ἴδιον καὶ τὸ ἀγαπητόν [“for there are two things that most cause men to care for and to love each other, the sense of ownership and the sense of preciousness”, in Politics 2.1262b].

Parr cited Aristotle’s turn of phrase, ἀγαπητὸν γὰρ ἀφῄρηται, referring in Rhetoric 1.7.41 to the eye, destroyed in him who had only one, in support of his reading of ἀγαπητὸν as unicum, atque adeo carum, unique, and therefore precious. He concluded: “The pronoun my, I believe, will always be found to have great weight, both in the sentiments and the duties of mankind.” His ensuing refusal to admit the possibility of even wishing well for those with whom we are not connected, elicited a sneer from fellow divine Sydney Smith, for passing off the desire for general good as “a pardonable weakness, rather than a fundamental principle of ethics”. Samuel Parr, George Clarke fecit 1825, William Skelton delineavit et sculpsit
In 1981, Bernard Williams advanced a different objection to the impersonal nature of moral systems by arguing for a limit to the idea of fairness and impartiality. Indeed, he suggested the justification of warranted partiality would be undermined by an appeal to impartial principles. To specify some such principle as to why and when is would be permissible to show partiality, is to undermine the reality of oneself as a being who qualifies as moral in virtue of his relations with his likes. The agent’s commitment to this abstraction as a guide to action would count as a “thought too many”. Postulating an agent having to choose one of two people to rescue from some catastrophe, and choosing to rescue his wife, Williams speculates that “it might have been hoped by some people (for instance, by his wife) that his motivating thought, fully spelled out, would be the thought that it was his wife, not that it was his wife and that in situations of this kind it is permissible to save one’s wife”. The pretense of impartial morality system discredits the agent’s rescue of his wife by belying its correct justification through a misbegotten insistence on the impersonal and impartial standards of morality that turns a blind eye to the role played in the agent’s life by the beneficiary of his aid. In general, Williams treats the notions that confer meaning on one’s life as more fundamental and more relevant to warranting his action than mere moral obligation. Thus he recapitulates Aristotle’s identification of two things that most cause men to care for and to love each other, the sense of ownership and the sense of preciousness.

As a Tunisian Jew, adoptive Francophone native speaker of Judeo-Arabic, an early supporter of anti-colonialism exiled from his homeland after its attainment of independence, Albert Memmi seems well qualified to define racism:

In a later work, Memmi continues:

My task is to identify real or imaginary differences that legitimate the exercise of aggression or the bestowal of privilege in private relations within a liberal society.

I shall now formulate a thought experiment designed to probe the limits of impartiality being taxed by two things that most cause my readers to care for and to love each other, the sense of ownership and the sense of preciousness:

You have been castrated. The love of your life is deceased. You find yourself in the midst of a fiery blaze. Would you sacrifice a dozen viable frozen embryos created with the last of your spermatozoa and her ova, to save a five year old clone of Adolf Hitler?

Poll #2076682 Save the child clone of Adolf Hitler or your potential progeny?

Open to: All, detailed results viewable to: All. Participants: 1

Choose one to extract from a fiery blaze:

a five year old clone of Adolf Hitler;
0(0.0%)
a dozen viable frozen embryos created with the last of your spermatozoa and your late lover’s ova.
1(100.0%)
As my readers ponder the preciousness of an innocent child of questionable descent, pitted against the sense of ownership in their last chance at producing biological progeny, I propose an alternative conundrum less marked with selfish concerns:

Josef Mengele’s Antarctic lab is on fire. You stand there, holding fast to the tenet that the value of human life vests at birth. Would you (1) save the infant Hitler clone, to return him to Mengele’s upbringing, and become an accessory to Nazi genocide by letting burn a million of Jewish zygotes that the good doctor had harvested at Auschwitz; or (2) let the innocent baby burn, and reinstate the Jewish germlines?

Poll #2076683 Save the child clone of Adolf Hitler or the germlines of Holocaust victims?

Open to: All, detailed results viewable to: All. Participants: 2

Save the Nazi messiah.
1(50.0%)
Rescue a million unborn Jews.
1(50.0%)
I now take your leave, gentle readers, to ponder your incentives to cruelty and kindness, in excess of your general tendency to congenial or disagreeable nature, as I ring in the New Year. All the best to you and yours in 2018!

Posts from This Journal “philosophy” Tag